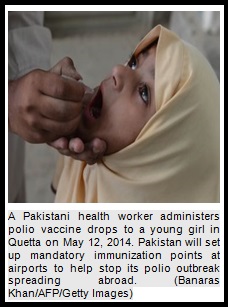 This week, two children – 1-year-old Ahmed and 16-month-old Laiba – became the latest victims to polio in Pakistan, taking the total cases in the country to 117 already this year. If current trends continue, this number is likely to grow substantially by the end of 2014.

Even a few cases of polio can quickly infect other children. Dr. Thomas Frieden, director of Center for Disease Control (CDC) said, “Without eradication, a resurgence of polio could paralyze more than 200,000 children worldwide every year within a decade,” he said.

Pakistan is one of the three remaining countries in the world where polio is endemic. But while cases are surfacing thick and fast here, this is not true for the other two countries in this bracket. Only 8 incidents have been reported in Afghanistan in 2014 and the number is even lower in Nigeria – currently at just 5. So something  is certainly going wrong in Pakistan.

A geographical breakdown of the incidents reveals that more than 70 percent of Pakistan’s polio cases this year have come from North Waziristan, part of the Federally Administered Tribal Areas (FATA). This region was under a vaccination ban imposed by local militant leaders since June 2012. However, Pakistani military operations in the past two months that have chased away most militants here has presented a golden opportunity in the campaign against prevalence of polio in the country.
This opportunity is not without challenges. Nearly a million people have been displaced from North and South Waziristan following the military action, resulting in a large number of internally displaced persons (IDPs). But this comes forward as an opportunity as IDPs being registered and vaccinated in very organized manner. Since polio is an extremely infectious disease, spreading primarily through feces, the movement of these groups to different parts of Pakistan is prohibited.

A recent Harvard poll in Pakistan has found that parents and other caregivers have several misconceptions against polio and its vaccine, resulting in fewer vaccinations even when they have access to immunization. Preliminary findings released by the researchers last month suggest that 30 percent of parents in Pakistan believe that paralysis from polio will be curable if their child got sick. Over a third of Pakistani parents in FATA aren’t aware that oral polio vaccine (OPV) must be taken every time it is offered in order to maximize protection against the disease. More than one in ten parents hadn’t even heard of polio.

This parental refusal to get their children vaccinated comes from ignorance and illiteracy, said Dr. Tanveer Zubairi, a Lahore-based chief consultant radiologist and president of FIMA (Federation of Islamic Medical Association), an Indiana-based non-profit that has advisor status at the World Health organization (WHO).

“They don’t know what polio is and that it doesn’t have any cure,” he said, citing a below 30 percent literacy rate in tribal areas. “They don’t know that their children get crippled – for life.”

Parents are suspicious of vaccinators who come to their home – the Harvard survey found only about a quarter of the parents in FATA trusted them “a great deal”. Worse still, they had apprehensions of the vaccine itself – nearly half the parents in FATA had heard damaging rumors against the vaccine, and a majority of them believed these to be true. Both Ahmed and Laiba’s parents had not got their children vaccinated.

These myths surrounding the vaccine existed in both high and low risk regions, and many parents believed it would cause sterility, or tuberculosis, or some other disease in their children, said Dr. Zubairi. “Some people are apprehensive that there is some sort of pork extract added to the vaccine,” he said, referring to religious problems this would stoke in Muslim communities. “But doctors have been trying to reassure people that they have checked and there is nothing of that sort.”

For even those who were open to vaccinating their children, coverage of the vaccine has been poor, as suggested by the findings of the study, which was conducted between November and December last year. While 70 percent of parents in FATA said that their children didn’t receive vaccines, 15 percent said that vaccinators didn’t even come to them during the last vaccination campaign.

Though inaccessibility and security was a big reason for this poor coverage, with the lifting of the militant rule, agencies have finally got a chance to dive into these areas.

The WHO declared polio an international public health emergency earlier in May this year. Between May 21 and August 9 this year, more than half a million children were vaccinated against polio, as per WHO estimates. Over 1.5 million doses of OPV were given to children in door-to-door vaccination campaigns for both the displaced and host communities.

Vaccines are also being given in Afghanistan, where several thousands of families have fled, following the military action. Health workers have been sent to settlements where the displaced people are staying, to give them polio as well as other necessary vaccines. The Pakistani army too has procured some polio vaccine kits to administer doses to families that are difficult to reach.

While this is encouraging news, is it enough? Along with these resources that are being pumped into the region, support infrastructure has to be evaluated too, experts suggest. Polio workers need to be recruited from these communities, and not at random, as it would breed more trust among parents.

The Grand Imam of Ka’aba (Mecca) recently implored Muslims around the world to get polio vaccines. This kind of positive message from the top of Islamic leadership is extremely useful. Yet, with many of these parents having no access to television or radio, these messages get lost in transit. Local religious and other influential leaders play an important part here to plug this gap and spread the message.

“People need clarification at various levels – local, familial, religious,” said Dr. Zubairi. “Efforts may not trickle down to all people at once but it’s a start.”

Researchers from the Harvard poll suggest that polio workers can build trust by offering additional services to the community, especially clean water, which is a big need in FATA. Bundling the polio program with other child vaccines could also broaden the scope and reach of these efforts.

Approaching polio through both oral vaccines as well as via injections could help reduce the spread of this crippling disease. While oral vaccines help improve community health (even the feces of a vaccinated child can help kill the polio virus in the neighborhood), said Dr. Zubairi, injections fully immunize the child by killing the virus leaving no scope for the disease.

“Perhaps then we’ll finally bid farewell to this deadly disease.”