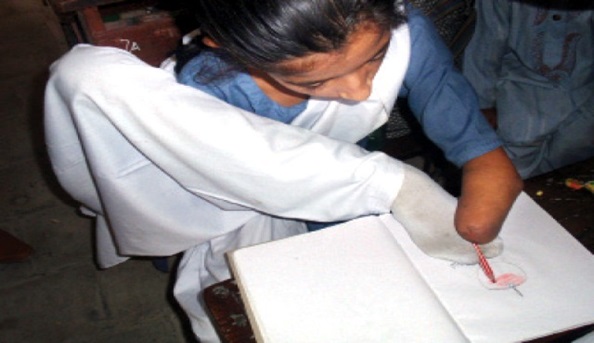 Shumaila loves to draw and colour, and often helps her classmates in their drawings, despite being physically challenged

SUKKUR: Shumaila was in kindergarten when she lost both her arms in a train accident. Today, the courageous sixth-grader has received the Pakistan Scottish Scholarship, proving that if you are committed enough, no handicap can be a barrier.

“Six years ago, I was going to Quetta with my grandmother to attend a wedding,” she told The Express Tribune. “We live near the railway station, and when I saw our train approaching, I ran to the track. My foot got stuck in it and I tripped. My grandmother tried to pull me away, but it was too late and the train ran over us.” Shumaila’s grandmother died on the spot and the little girl lost both her arms, one below her elbow and the other below her shoulder.
Shumaila was rushed to Civil Hospital, Sukkur, for surgery. After a month’s absence, she went back to school and started afresh. “My classmates, teachers and principal supported me endlessly, and look at me now!” exclaimed the Class VI student of MK High School Sukkur. She learnt not only how to write using her feet and her left wrist, but also to draw and colour.
Unlike her classmates, who want to be doctors and engineers and teachers, Shumaila’s dream is to become a lawyer, so she can help the poor and needy get justice. She was recently awarded the Pakistan Scottish Scholarship, under which she will receive Rs12,000 each year. The scholarship will also provide her with stationary, uniforms and a sanitary kit among other items.
Her father, Mohammad Ishaq, remembers the time of the accident as the worst in his life. Bemoaning the lack of medical facilities in the city, the Election Commission employee said that his daughter’s arms could have been rejoined if modern healthcare had been available in Sukkur. However, he remains proud of her. “Instead of giving up, she defeated her disability,” he said, adding that as the eldest of five siblings, she even helps her mother at home. “I will always try my best to make her dreams come true.”
Dr Irfan Ahmed Rind, the education department head at the Institute of Business Administration, Sukkur, and the British Council Connection Classrooms focal person, told The Express Tribune that his team had chosen Shumaila for the scholarship after visiting 10 schools in the city.
“We know that Rs12,000 is not a large amount,” he said. “Therefore, we are trying to contribute more for Shumaila.” He further said that while the scholarship programme had earlier been restricted to deserving female postgraduate students, it had now been expanded to cover primary education as well.
“This girl has done wonders,” said Liaquat Ali Abbasi, one of Shumaila’s teachers, while school principal Farzana Akram extolled her bravery. “While the scholarship is not enough to cover her expenses, it is a great achievement and we see it as a boost for such students,” she said. “Shumaila is an example for all those who lose hope after becoming disabled.”